SCAM ALERT: Some SLFCU members report they are receiving fraudulent emails appearing to come from Geek Squad that direct them to call a phone number to avoid their computer being compromised. If you receive such an email, do not reply or call the number within it, and delete the email immediately. Also, as a reminder, SLFCU will NEVER email, call, or text you to ask for your online banking credentials, your PIN, or to request a transfer of funds. 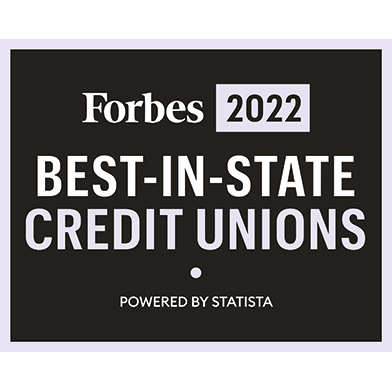 Sandia Laboratory Federal Credit Union has received the prestigious top 'Best-in-State' Credit Union award for New Mexico from Forbes magazine for the third year since 2019, and has made the list of the top three credit unions in the state for the fifth consecutive year.

Forbes has been ranking best-in-state credit unions for five years in partnership with market research firm Statista to "shine a light on the best credit unions in each state," as the publication stated in its June 21, 2022 issue. To prepare this year’s list, Statista conducted in-depth interviews with more than 26,000 U.S. citizens from all 50 states. Survey participants were asked to provide an overall satisfaction score with their credit union, and whether they would recommend their credit union to friends and families.

Statista also asks a detailed battery of questions focused in six separate areas of their credit union relationship: trust, terms and conditions (including reasonable and transparent fees), branch services, digital services, customer service and financial advice. Based on a scale of 1-100, just 3.4 percent of the more than 5,041 credit unions across the country made the cut for the best-in-state rankings.

"We are honored to receive this distinction again in 2022, and thank our members for their ongoing trust and loyalty. SLFCU is committed to service in action – working in the best interest of our members while growing and helping our communities," said Stephanie Sherrodd, SLFCU's President and CEO.

She added, "This award is especially meaningful because it is based on an objective scoring system and the surveys are administered by an independent research firm. The fact that we have made the list for the past five years and have achieved the top ranking in three of them is a testament not only to our members, but also to our talented and dedicated staff."

The Forbes article noted, "The economic environment in which banks and credit unions operate is now getting more challenging with the Federal Reserve and other central banks around the word pursuing a committed course of short-term rate hikes to fight the highest inflation in more than 40 years...the imperative to maintain customer relationships rises even higher in importance and becomes more urgent business for small banks and credit unions. The firms with the highest levels of customer satisfaction will enjoy a long-term competitive advantage versus less adept practitioners of pleasing and keeping clients."

"Members know us as the place where their money works smarter. We are inspired every day to continually exceed their expectations. We are aiming to be number one again in 2023," Sherrodd concluded.