Many of SLFCU’s branch lobbies have re-opened for member service with additional safety precautions. Kirtland and Livermore East remain closed. Learn more. To read more about how COVID-19 is affecting SLFCU, click here. 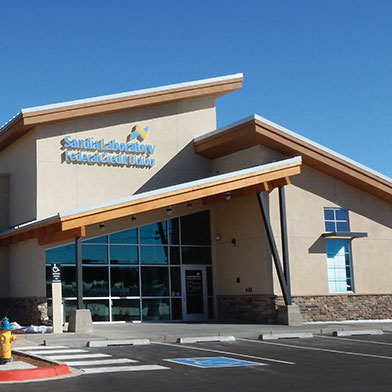 Since 2012, Selby has been reviewing and entering utility data for all of SLFCU’s branches into an EPA program to track SLFCU’s energy consumption and conservation efforts. “My focus has been to reduce our overall energy consumption at SLFCU,” he says. “The rewards take time and concerted efforts to materialize.”

For a building to qualify for EPA ENERGY STAR certification, it must receive a minimum score of 75 on a scale of 1-100 that measures where its energy performance falls in comparison to more than 450,000 properties nationwide. A score of 75 means that the building is performing better than 75% of all similar-use buildings across the U.S. when it comes to energy conservation.

In addition to the Edgewood, Rio Rancho, and Paseo del Norte branches, SLFCU has seen a significant decrease in electrical usage at the Juan Tabo branch, with an overall reduction of 6.4% compared to the baseline year of 2012-2013. Other branches that have also seen a significant decrease since 2012 are Cottonwood (21.4%), Livermore East (19.5%), Tech Park (12.9%) and Paseo del Norte (11.6%).

“When launching projects, we focus on using energy saving products and equipment with an emphasis on lighting and HVAC components. At existing branches, several retrofit projects have assisted in the reduction efforts, too,” says Selby. Some of these projects include converting the exterior parking lot lights at the Juan Tabo, Cottonwood, and Tech Park branches to LEDs, replacing older rooftop HVAC units with more efficient units, and transitioning to LED lighting in building interiors.

“As we strive to conserve energy individually and as an organization, I am confident 2020 will afford us new opportunities to ‘save a watt or a BTU,’” Selby says.