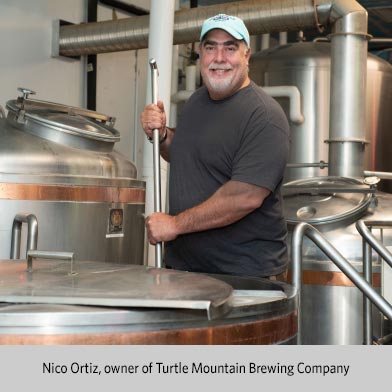 Nico Ortiz, the owner of Turtle Mountain Brewing Company, confirms that succeeding in the restaurant and brewing business is not as easy as serving up your grandma’s famous enchilada recipe, brewing a gold medal IPA, or being a “people person.” In fact, the statistics are pretty grim: according to 2021 National Restaurant Association statistics, one in three restaurants won’t survive their first year. As they enter their 24th year of operation, Turtle Mountain Brewing Company has beaten those odds handily. They boast two Rio Rancho locations and an army of enthusiasts that made sure the venture not only survived but thrived during the pandemic.

WORK TO YOUR STRENGTHS

“In my opinion, you have to have a certain amount of humility to do this well,” shares Ortiz. “It’s critical to know what you don’t know. When I started Turtle Mountain, I knew very little about the restaurant/brewery business, so I hired a head brewer, a kitchen manager, and a front-of-house manager who helped me fill in the gaps in my knowledge.”

What Ortiz does do very well is manage the operation. While attending Northwestern University’s Kellogg School of Management, he tried the corporate route as a summer intern at American Express, but soon learned that being his own boss was a much better path. “I figured out pretty quickly that I needed to create my own job and my own rules,” he says with a laugh. Nico inherited some money after his father’s passing, and in 1999 decided to open a brewpub in what was a quickly growing Albuquerque bedroom community called Rio Rancho.

BECOME PART OF THE COMMUNITY

The company’s second location has proven to be very successful – even with opening at the tail end of the pandemic in Rio Rancho’s Enchanted Hills neighborhood. “We’ve hosted weddings, anniversaries, and even end-of-life celebrations at our restaurants. Now, we are hiring the children of our first employees, says Ortiz.” He adds he is most proud of the fact that working at Turtle Mountain has helped many employees buy cars, purchase homes, start families, and send children to college. “We’ve had a positive impact in Rio Rancho and are part of the tapestry of the community. We’re a refuge and a fixture in many people’s lives.”

FIND A FINANCIAL INSTITUTION THAT IS THERE FOR YOU

“After 20 years as a big bank customer, I moved to SLFCU because they were there for me when I needed them most,” says Ortiz.  For him, moving to a credit union has come with the side benefit of saving a lot of money. “I was paying almost $200 per month for a business checking account. With SLFCU, I get dividend deposits every month, so I am being paid to have my accounts at SLFCU. I will never go back to the for-profit banking world again.”

Interested in a financial institution where your money will work smarter? SLFCU is local, and we have money to lend. We’d be pleased to be a part of your story. Contact Casey Bresnahan for personalized, expert service: CBresnahan@slfcu.org.