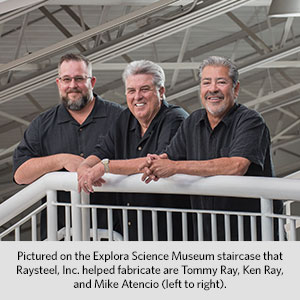 “People do business with people, not companies,” says Ken Ray, current CEO and founder (soon to be retiring) of Raysteel, Inc., an Albuquerque-based steel fabricator and SLFCU Business member. “It’s not about the name on the sign, it’s about the people behind the sign.”

Their focus on building strong relationships is what led Raysteel to join SLFCU. In 2011, after more than 20 years of banking with a large, national bank and shortly after the recession hit, Raysteel was labeled “high risk” and their line of credit was limited. Their local representative at the big bank had turned their back on the company, and they found themselves in the midst of an unpleasant back and forth with an out-of-state representative. Ken’s wife, now a retired SLFCU employee, worked at our Juan Tabo branch and suggested he speak with someone at the Credit Union. Ken knew SVP and Chief Credit Officer Andrew Jaynes from previous business interactions and reached out to him about the situation. “Andrew said that SLFCU would be happy to look at our portfolio and see if they could help us. And there was no hesitation – they took us right away,” says Ken.

“That entire experience was quite a wake-up call for us in terms of being careful of who we deal with, not only on the customer side but also on the vendor and supplier side,” says Tommy Ray, Ken’s son and President/majority owner of Raysteel. “The financial end of a business is complicated. When you have a bank that’s not looking out for you as much as they are themselves, or is not as willing to help, it’s added pressure,” he says. “Knowing that we now have people who understand how to support a local business has really taken a lot of stress off of us. We were a drop in the bucket for that big bank - they didn’t care if they had us as a customer or not. We don’t ever get that feeling from SLFCU. It always feels like SLFCU is happy to have us as members – and that goes a long way because that’s how we treat our customers.” 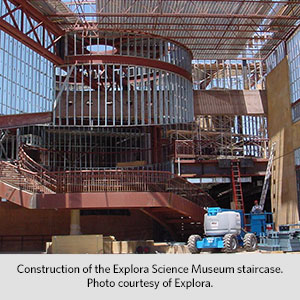 Placing value in the relationships they’ve built with their customers and employees has been integral to Raysteel’s success. Founded in 1989 by Ken and current Vice President and shareholder Mike Atencio, the company has spent the last thirty years establishing themselves as experts in the miscellaneous steel industry. Today, they are one of the largest miscellaneous fabricators in the Southwest, working on one-of-a-kind projects like the staircase inside the Explora Science Museum in Albuquerque as well as one inside the Inn of the Mountain Gods in Mescalero, NM. In recent years, Raysteel has moved on to bigger projects such as a shopping mall re-design in California and the new Tin Can Alley restaurant and shopping area in Albuquerque’s far Northeast Heights.

Their experience in creating complex, custom pieces is what sets Raysteel apart from other fabricators. Now, with the support of SLFCU and a strong team beside them, Tommy and Mike are ready to take Raysteel into the future by looking at significant technology upgrades that can help them improve quality and reduce cost. “The industry is changing. We are going to embrace some pretty radical technology in terms of our business,” says Tommy. “Because everything we make is custom, it’s been difficult to find technology that meets our needs. But there have been some real advances that we can use.”

Even as he looks toward the future, Tommy still embraces the relationships that helped Raysteel get where it is today. “We have a team around us with employees that have been here for 25+ years,” he says. “In this industry, that’s crazy. When we say it’s a family business, we don’t mean just my dad and me. We treat everybody like they are part of the Raysteel family. It’s a partnership. And SLFCU is a is a big part of that.”